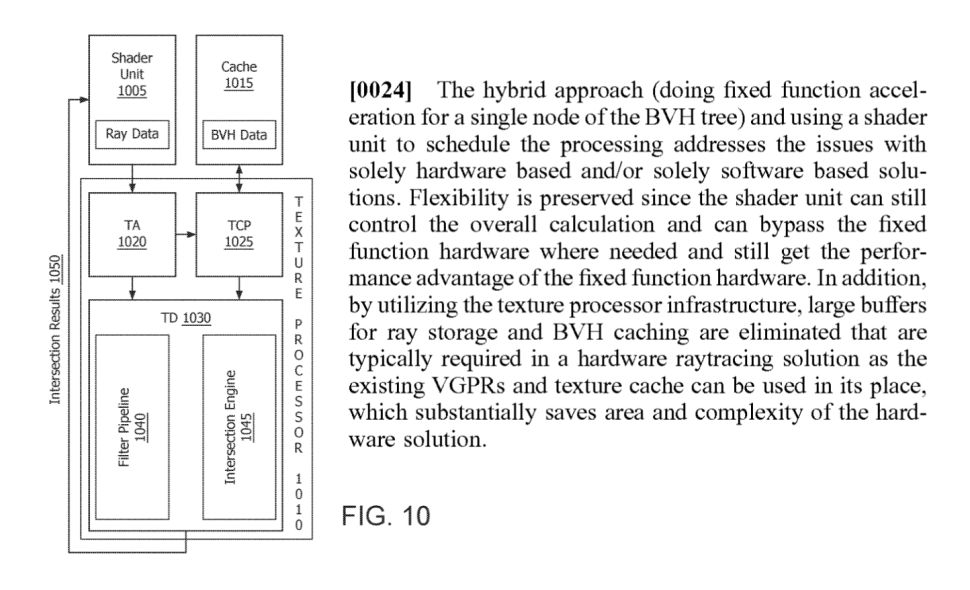 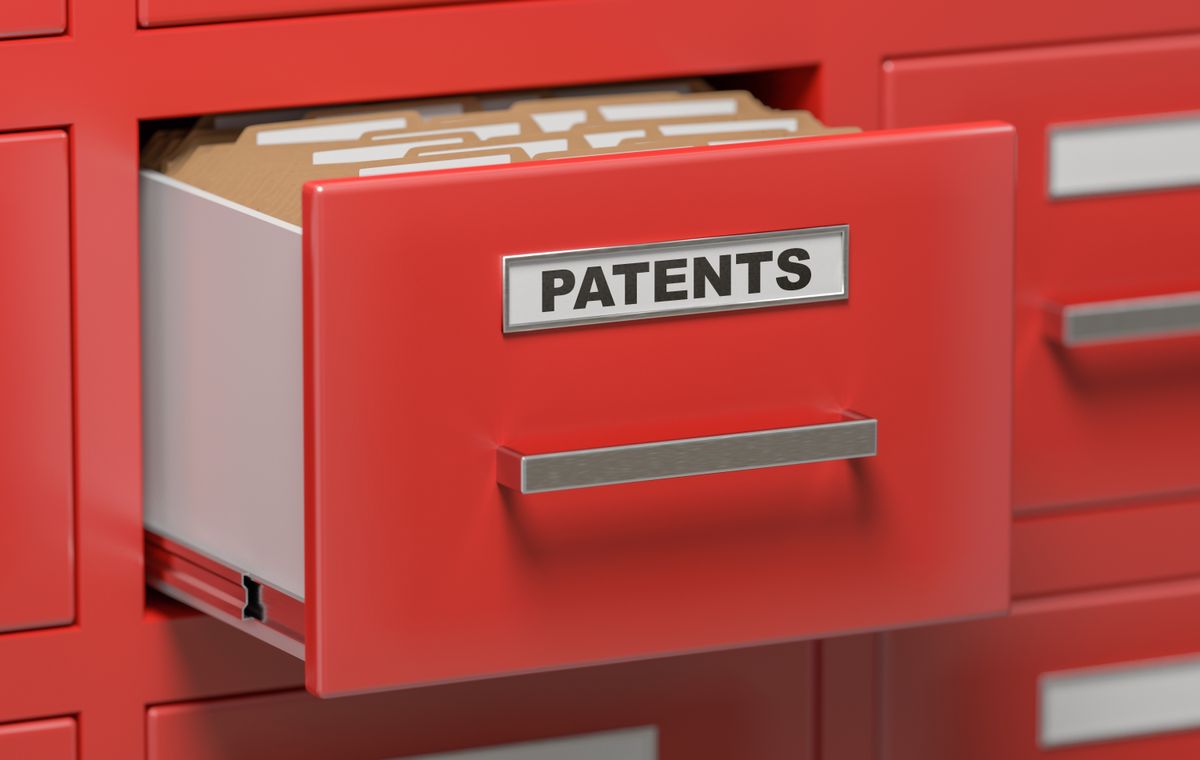 AMD's stayed quiet about how it plans to support ray tracing, but a patent application published on June 27 offered a glimpse at what it's been working on. 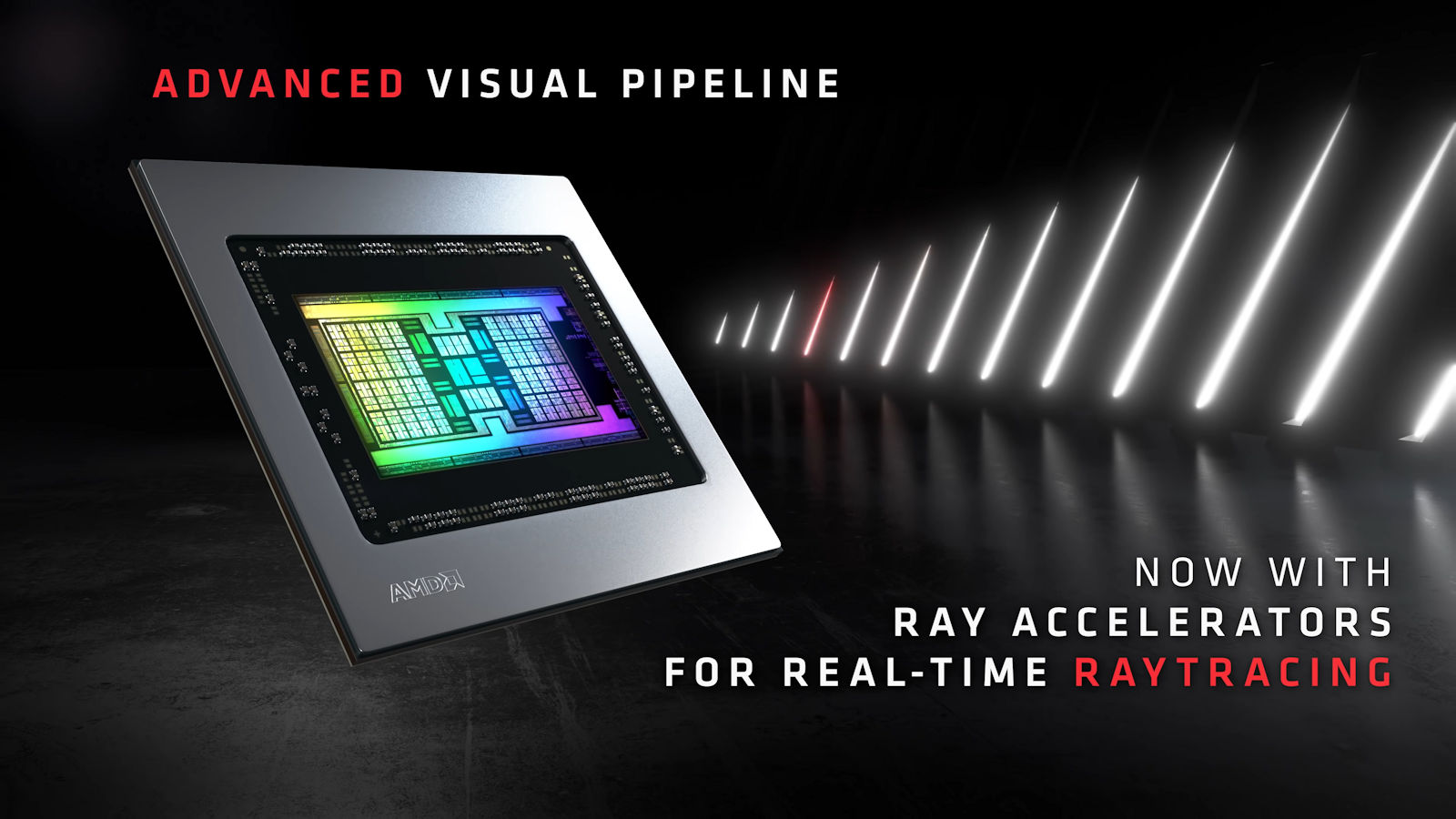 While NVIDIA has been focusing on RTX (NVIDIA Ray Tracing) and DLSS (Deep Learning Super Sampling) technologies at GeForce Ampere launch, AMD paid more attention to raw performance, lower power requirements, and innovative memory technology coming with RDNA2 graphics. It does not mean, however, that AMD has no intention to reveal similar technologies. 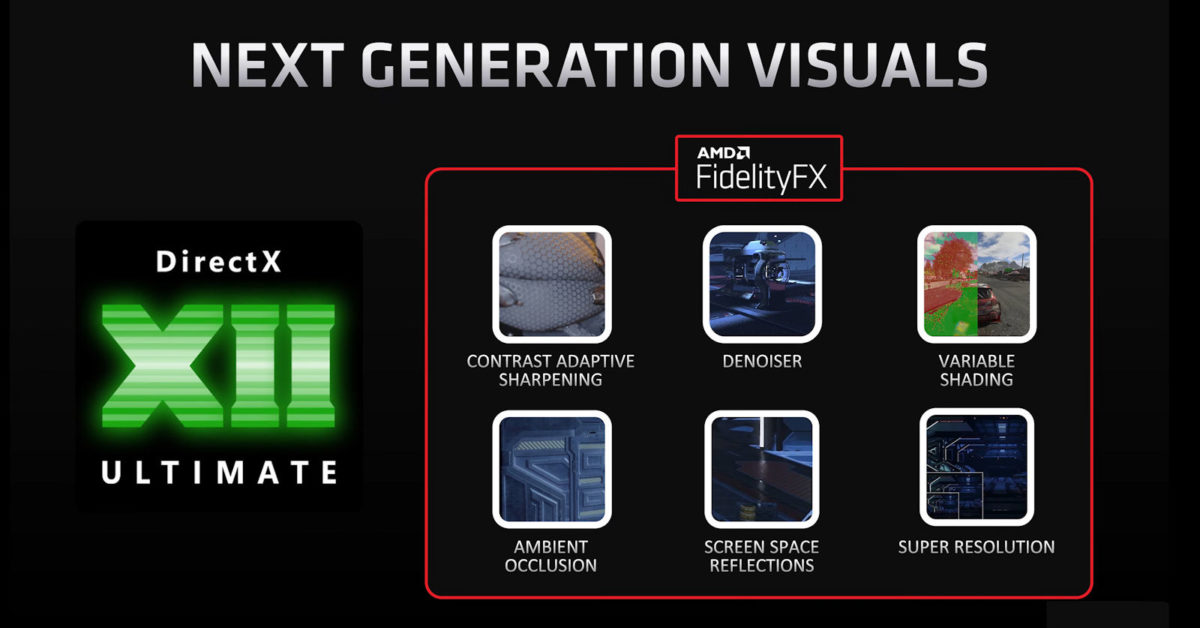 Yesterday’s announcement lacked details on AMD’s response to NVIDIA DLSS, a machine-learning powered super-resolution technology that can boost graphics card performance by a significant margin simply by reconstructing the image that was never rendered by the GPU in the first place. Instead, a prediction is made, often adding more details to the image than native resolution.
At AMD Radeon RX 6000 announcement Scott Herkelman said:

We are always looking to help developers with new initiatives and we are already working on a super-resolution feature to give gamers an option for more performance when using ray tracing.
Clique para ver tudo...

It is unclear if the upcoming super-resolution feature will only work when ray tracing is enabled or these are rather two separate technologies that can be enabled separately, similarly NVIDIA.
Tom Warren from The Verge received more information on this super-resolution technology:

While AMD is promising to go head to head with Nvidia in 4K gaming and more, the one big missing piece of this battle is a lack of an equivalent to Nvidia’s DLSS. Nvidia’s AI-powered super sampling technology has been transformative for the games that support it, bringing great image quality and higher frame rates by simply toggling a game setting.
AMD tells me it has a new super sampling feature in testing, which is designed to increase performance during ray tracing. The company is promising its super sampling technology will be open and cross-platform, which means it could come to next-gen consoles like the Xbox Series X and PS5. AMD is working with a number of partners on this technology, and it’s expecting strong industry support. Unfortunately, this won’t be ready for the launch of these three new Radeon RX 6000 Series cards.
Clique para ver tudo...

While AMD clearly announced the feature as a part of FidelityFX technology, Tom Warren claims that this technology will be open and cross-platform. It is hard to image NVIDIA supporting FidelityFX supersampling, so we assume that this technology will be part of Microsoft DirectML technology.
XBOX Series X/S also features ML interference acceleration. The AI ‘tensor’ cores require a very small area of the die, while can provide 3-x10x performance improvement, a slide from Microsoft claimed.
DirectML super-resolution a Microsoft technology that was demonstrated back in 2019 during Game Developer Conference. It can provide a higher framerate and lower latency compared to TensorFlow, which was not designed for real-time super-resolution. 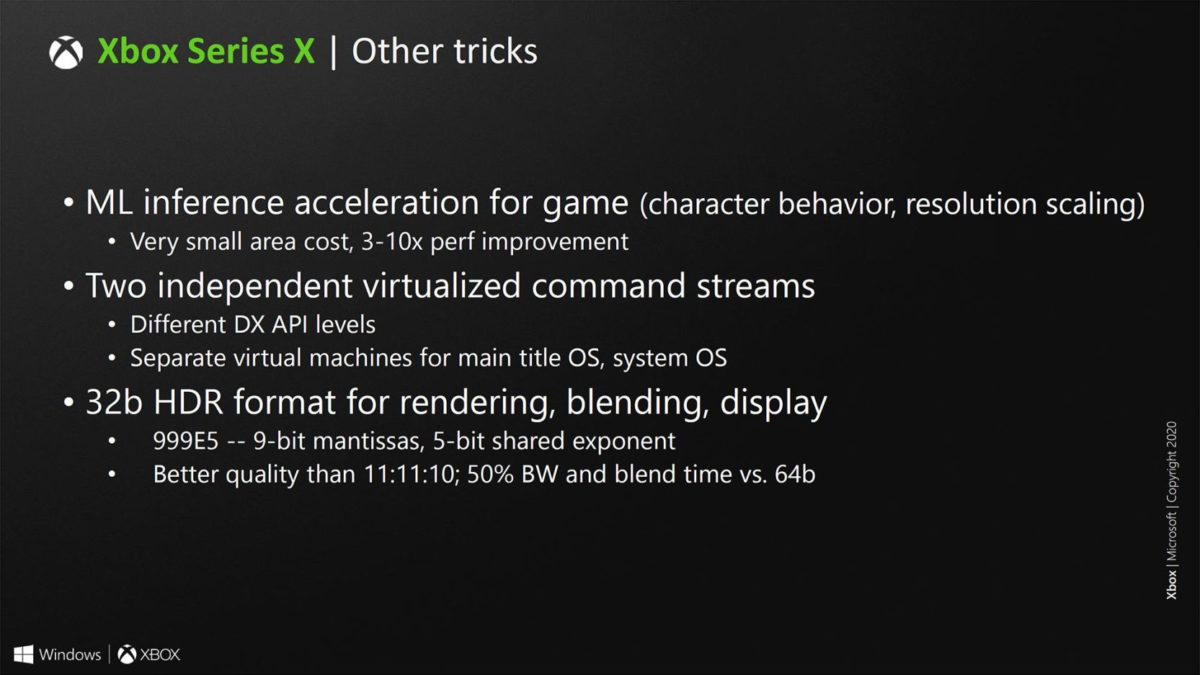 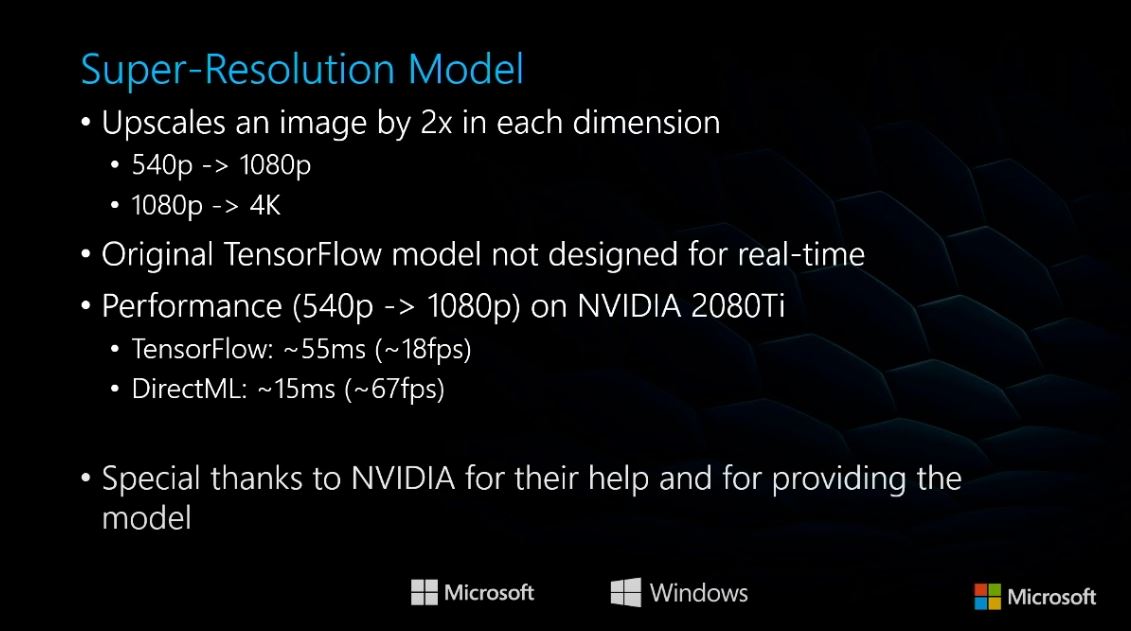 Big Navi is here. The Radeon RX 6000 series and the underlying RDNA 2 GPU architecture herald a new era of Radeon graphics power. To get the most out of these exciting new GPUs, ASUS engineers have been hard at work developing custom versions that deliver the high performance, low temperatures, and quiet operation that enthusiasts expect. Whether you choose ROG Strix or TUF Gaming Radeon RX 6000 series cards, you’ll find they deliver on all those expectations—and we’ve even put a liquid-cooled twist on our highest-end ROG Strix card so far for this generation.

The ROG Strix LC Radeon RX 6800 XT puts a big chill on Big Navi
The Radeon RX 6800 XT is one of the most powerful GPUs that AMD has ever built. As we began to sketch out the ROG Strix version of the RX 6800 XT, its raw power spurred our engineers to build a cooling system that could unleash its full potential. During this process, our thoughts naturally turned to liquid cooling. PC enthusiasts the world over are already familiar with the benefits of all-in-one liquid cooling systems for their CPUs, and many of them have even added similar systems to their graphics cards using aftermarket kits to pursue the outer limits of GPU performance.

To take full advantage of the benefits of liquid cooling, we built the ROG Strix LC Radeon RX 6800 XT from the ground up with a custom pump module that's specifically tailored to the needs of a graphics card. A large cold plate cools both the GPU silicon and the GDDR6 memory modules that ring the chip. The heat from those components is transferred directly into the liquid cooling loop rather than into the case’s internal environment. At the other end of the loop, we chose a 240mm radiator to strike the right balance between high cooling potential and broad compatibility with the mounting points available in today's PC cases. A low-noise blower fan and low-profile heatsink within the shroud of the graphics card ensures that the power-delivery circuitry stays chilly.

Because the liquid cooler's radiator can be secured to a wide range of mounting points inside today's cases, the ROG Strix LC Radeon RX 6800 XT creates intriguing possibilities for high-performance system builds. For example, the radiator can be mounted directly on a case exhaust vent, ensuring that the heat produced by the GPU and memory never has an opportunity to circulate into the rest of the system. This direct-exhaust approach provides ample cooling performance for the graphics card alongside lower temperatures and potentially higher performance for the rest of the components in a system. If the highest possible GPU cooling performance is a priority, builders with robust system cooling can mount the 240mm radiator and its fans on an intake vent to give the GPU cooling loop access to the freshest, lowest-temperature airflow available. 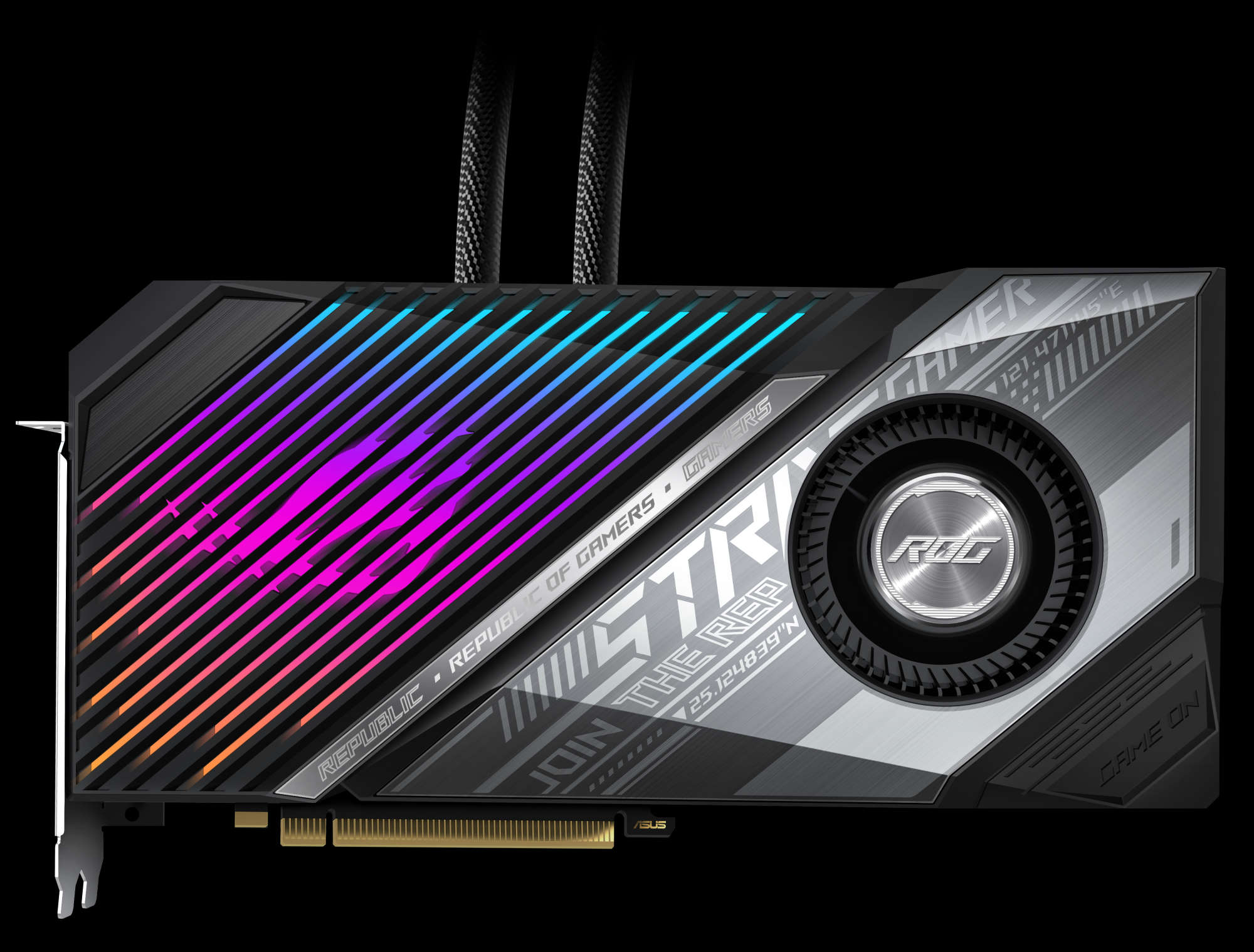 However you mount it in your PC, the ROG Strix LC RX 6800 XT is made to seamlessly integrate with your build. We equip the card with especially long 600mm coolant hoses to allow for more mounting options in a case, even in EATX enclosures with cavernous interiors. Those hoses are sleeved in textile webbing to protect against abrasion and to add an extra touch of class to your system.

To move heat out of the loop, we use a pair of custom-designed 120mm radiator fans that are optimized for both high CFMs and static pressure to keep air moving through the closely packed fins of the heat exchanger. As with other ROG Strix cards, you can extend the ROG Strix LC RX 6800 XT's onboard fan control intelligence to a pair of system fans using a pair of our FanConnect II headers. These headers let connected case fans respond directly to changes in GPU temperatures, increasing cooling airflow right when it's needed under gaming loads. They can also respond to changes in CPU temperature if you simply need more fan headers to hook up to in your system.

As we developed the ROG Strix LC RX 6800 XT, we wanted to build a graphics card that was unmistakably ROG not just in its performance, but also in its appearance. Light from addressable Aura RGB LEDs shines through striations in the card's cooling shroud, illuminating plenty of distinctive ROG iconography and cyber-text accents. An illuminated ROG logo on the edge of the card communicates your allegiance whether you choose horizontal or vertical mounting for your GPU. The radiator fans include addressable Aura RGB LEDs to bring the light show to wherever you choose to mount the radiator.

Taken as a whole, the ROG Strix LC RX 6800 XT's tantalizing combination of liquid cooling and bold style are a perfect pairing to unleash all the performance available from the next generation of high-end Radeon graphics. It'll make its mark both in the frame rate that it delivers to your gaming display and through the window of your case.


The ROG Strix RX 6800 flies high with a full complement of ROG innovations
Alongside the Radeon RX 6800 XT, AMD is also announcing the Radeon RX 6800 to bring Big Navi's performance to more midrange systems. For Radeon fans in the Republic of Gamers, the ROG Strix version of the RX 6800 comes decked out with all of our latest advancements for air-cooled graphics cards.

A massive 2.9-slot heatsink effectively transfers heat away from the GPU silicon itself using multiple heat pipes and a base plate with our MaxContact finishing tech, which increases surface area for better heat transfer. A trio of fans with our latest Axial-tech design pushes plenty of airflow through the heatsink's dense fin array while minimizing noise levels. Notched barrier rings on the outer fans, along with a counter-rotating central fan and higher blade counts across the board, ensure that airflow is directed to the hottest parts of the GPU cooler with minimal interference from unwanted turbulence. The custom short PCB of the ROG Strix Radeon RX 6800 also allows us to create a ventilation cutout in the full-length back plate of the cooler, providing more room for heat to exit the GPU and enter the case's airflow path.

The ROG Strix cooler delivers a healthy dose of style alongside its impressive performance potential. Across both its shroud and its full-coverage backplate, a subtle palette of grays and silvers provides an ideal base canvas for RGB LED-illuminated systems, and an eye-catching addressable Aura RGB LED array on the edge of the card integrates with the rest of your Aura Sync-compatible components for an easily coordinated light show. As with the ROG Strix LC Radeon RX 6800 XT, the ROG Strix RX 6800 can extend its cooling intelligence to your system fans with its pair of FanConnect II headers. 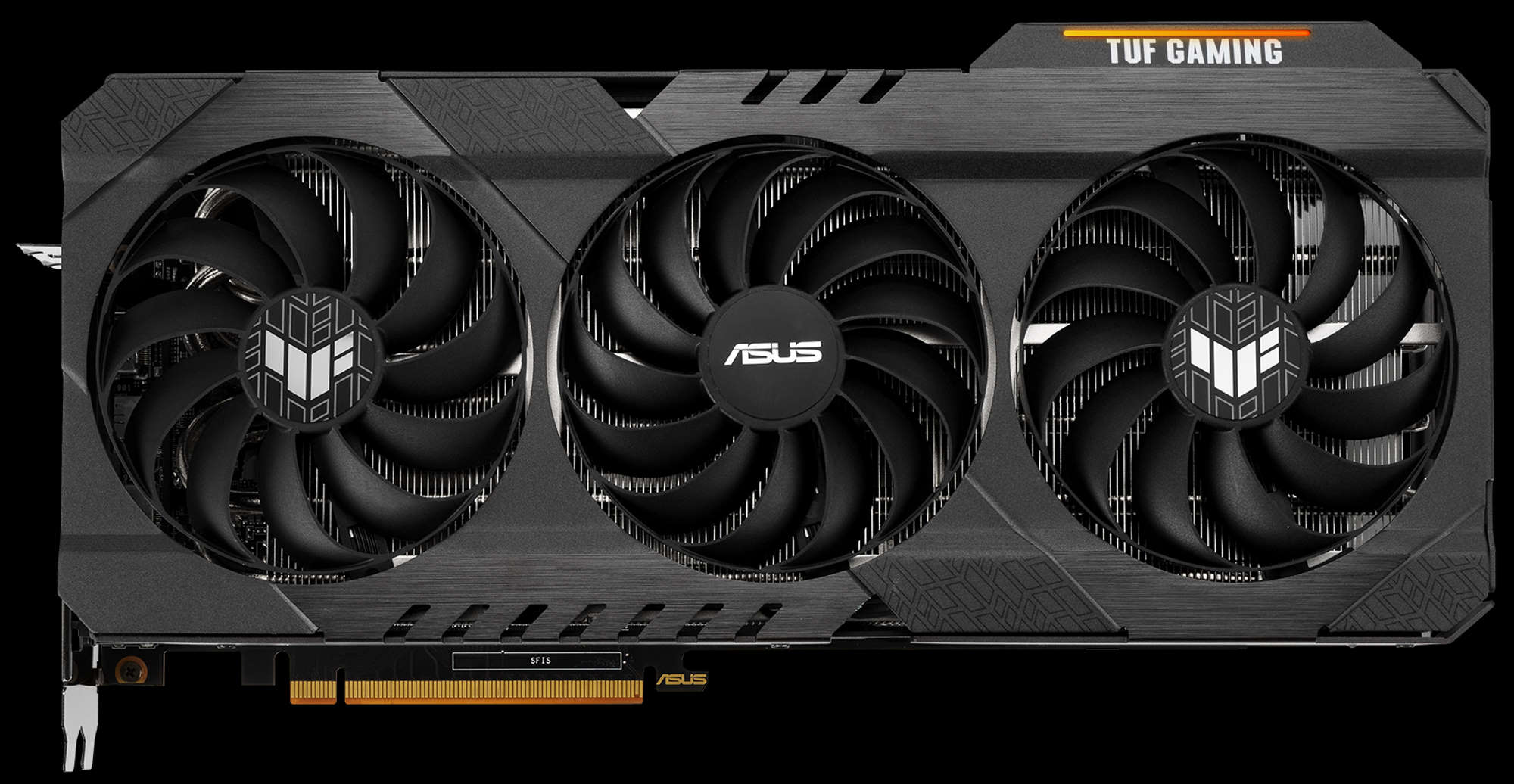 The cooling design of both cards starts with a 2.9-slot heatsink built for plenty of thermal headroom and quiet operation under the demands of today's highest-wattage GPUs. We move air through that high surface area heatsink using three fans with our latest Axial-tech design. Just like on the ROG Strix cooler, the central fan rotates clockwise while the two on the flanks spin counter-clockwise to reduce turbulence. These fans allow for higher RPMs and more air movement through the heatsink without a corresponding increase in acoustic footprint. An angular aluminum shroud with a rugged new industrial design wraps around the heatsink to suggest a sense of purposeful performance. 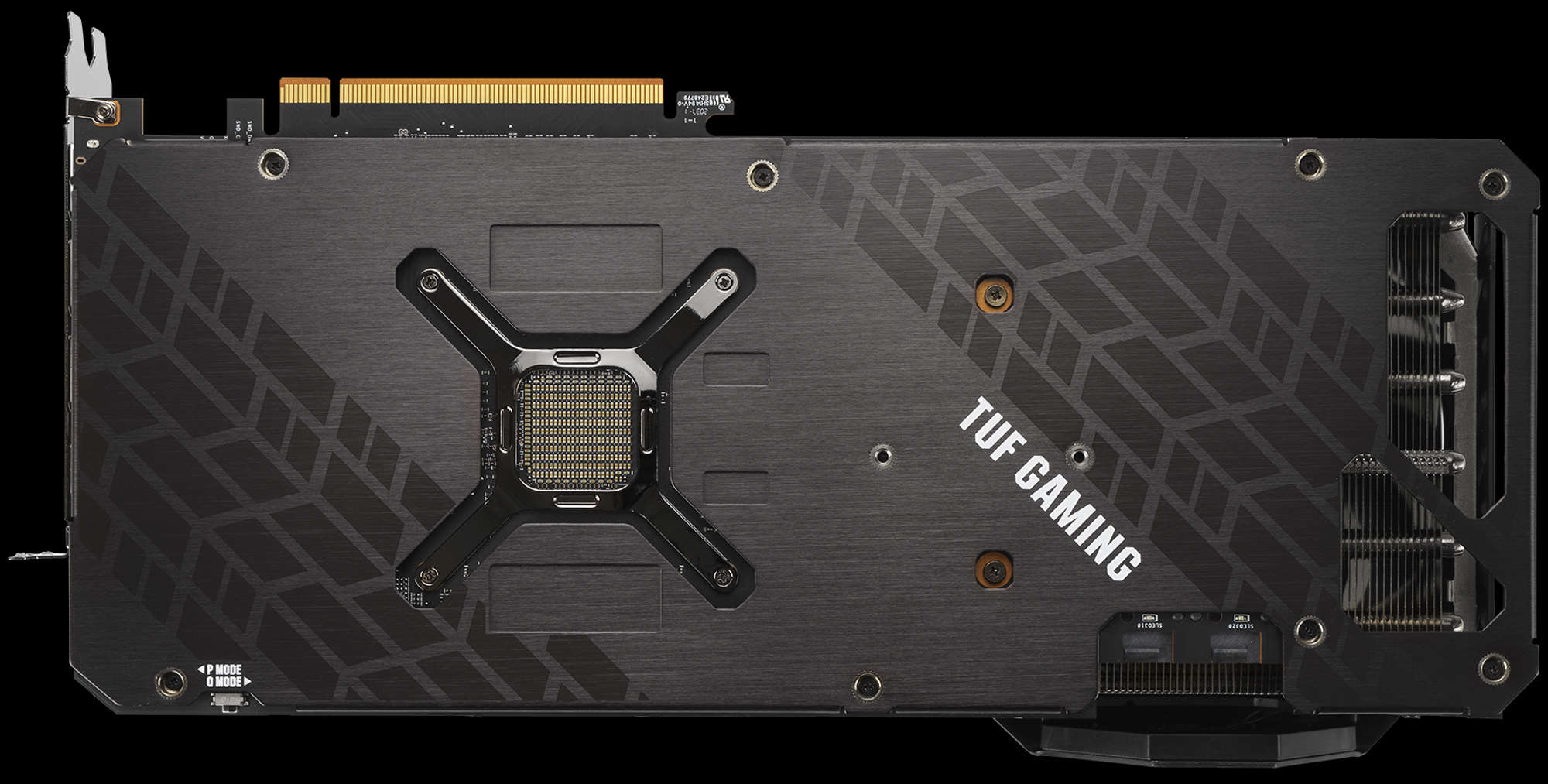 A full-length aluminum backplate adds a touch of style to your system with subtle TUF Gaming graphics, and a large ventilation cutout ahead of the short custom PCB provides another route for hot air to enter the case's airflow path. Auto-Extreme assembly technology, used across our lineup, precisely places and solders components without human intervention to boost reliability and build quality. A 144-hour testing regime and extra-sturdy capacitors ensure out-of-the-box reliability and a long service life. And you’ll be able to personalize your TUF Gaming card to match the rest of your system using the onboard Aura RGB LEDs, too.

For more information on pricing and availability of all of our new Radeon RX 6000-series graphics cards in your region, please contact your local ASUS representative. 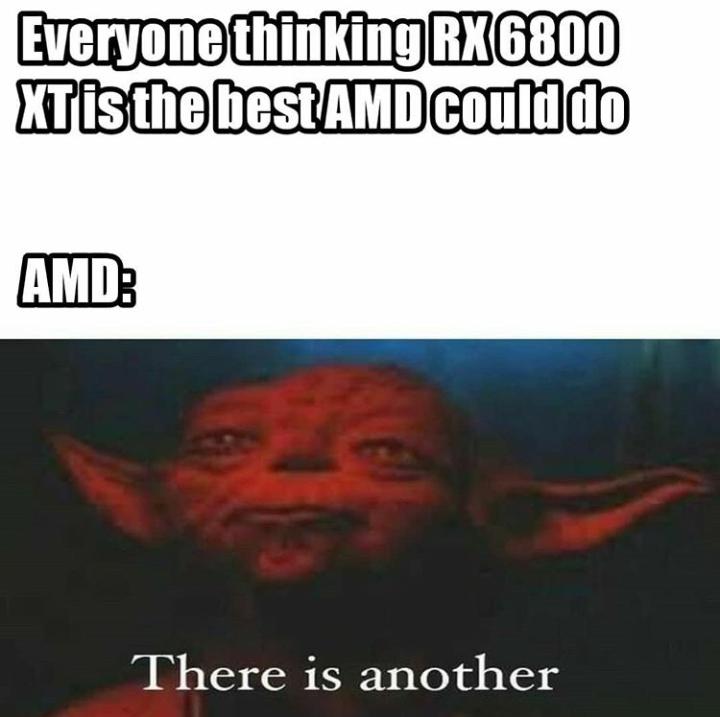 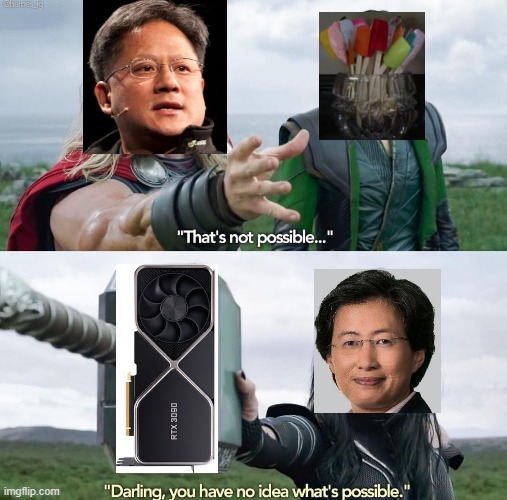 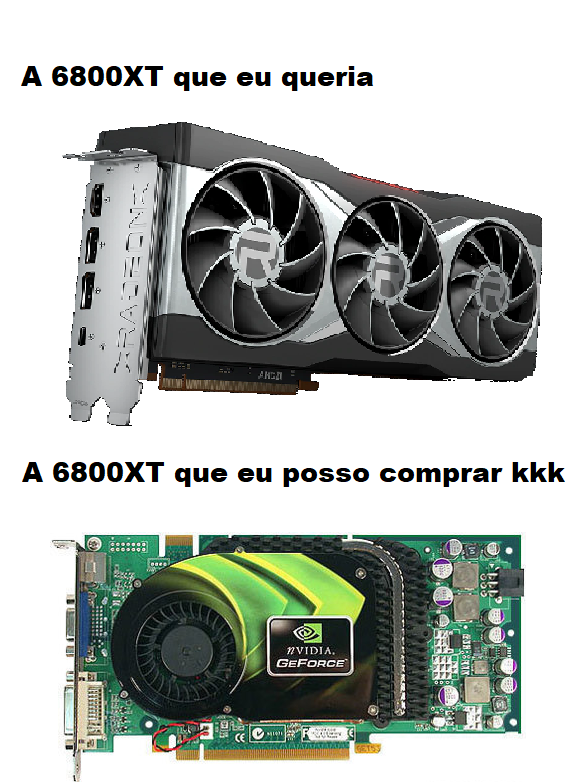 MSI has also today revealed the custom design featuring AMD’s Navi 21 GPU based on RDNA2 architecture. The graphics card presented by MSI today is based on Raden RX 6800 XT SKU, which has 4608 Stream Processors and 16 GB of GDDR6 memory.

MSI Insider hosts revealed that these are the first renders of the graphic card’s design, so these are not even real photographs yet. The release date of this custom model has not yet been confirmed. The clock speeds also remain to be disclosed by MSI at a later time. The manufacturer confirmed it will launch more custom designs based on Radeon RX 6800 series. 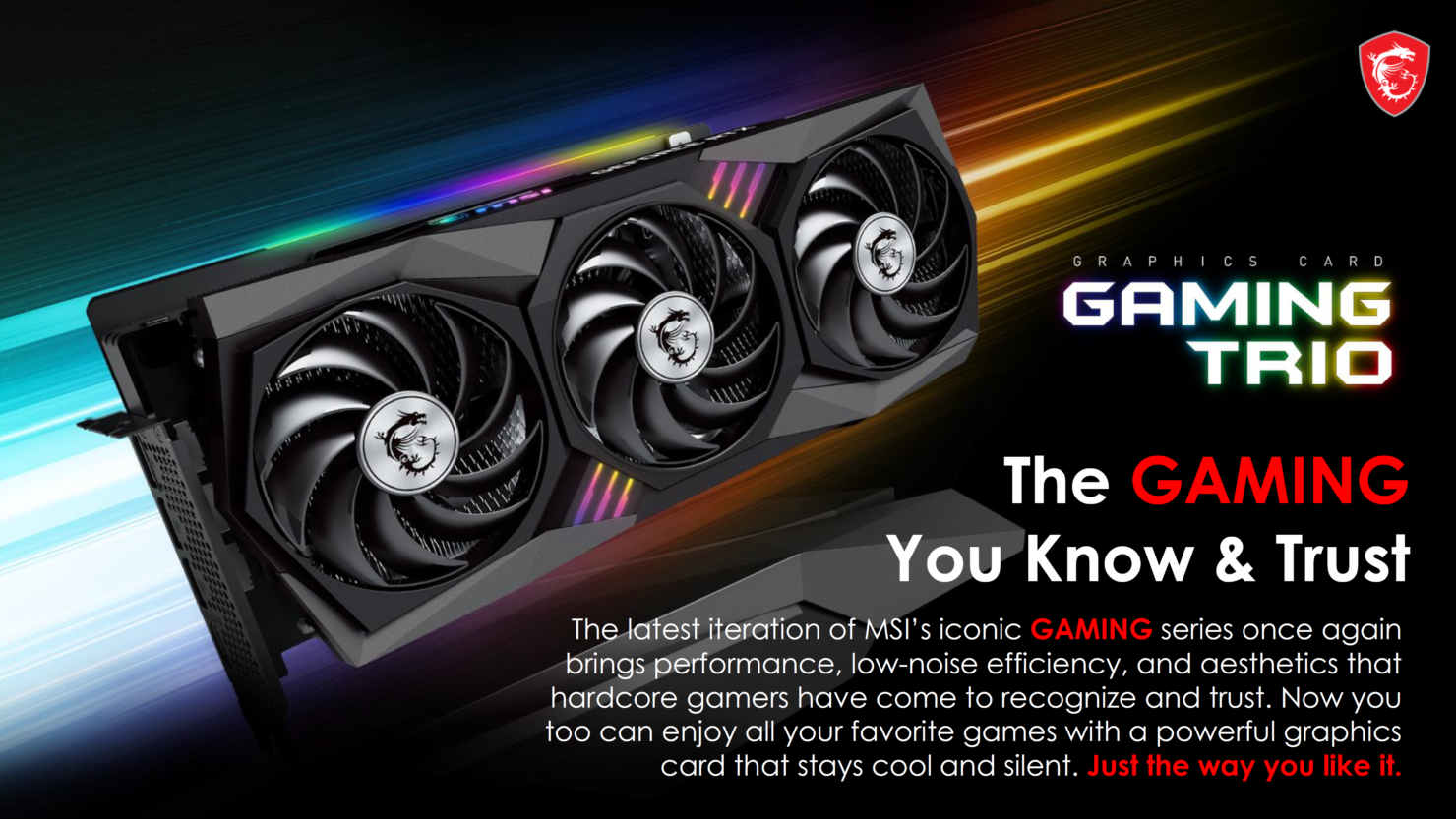 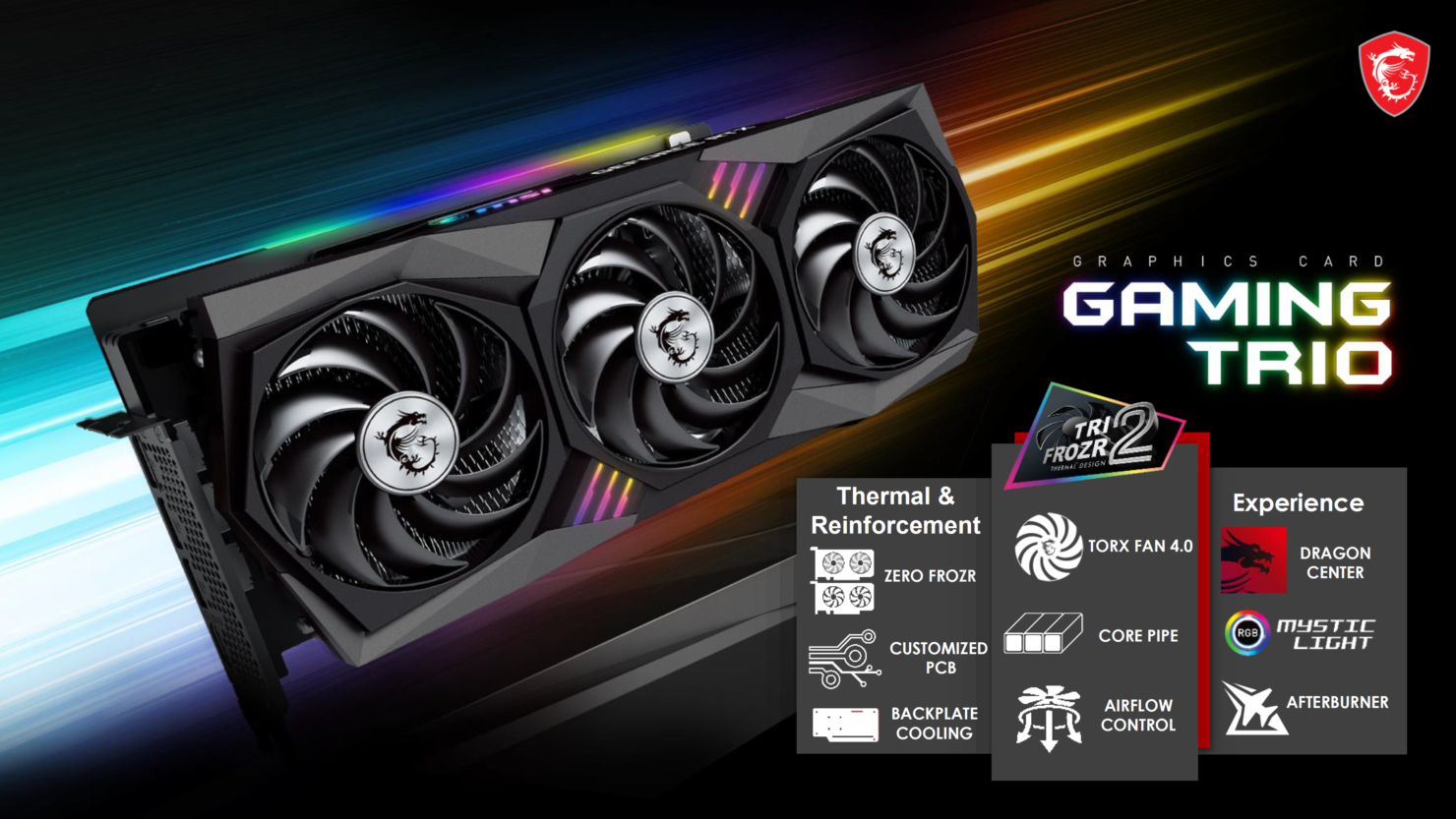 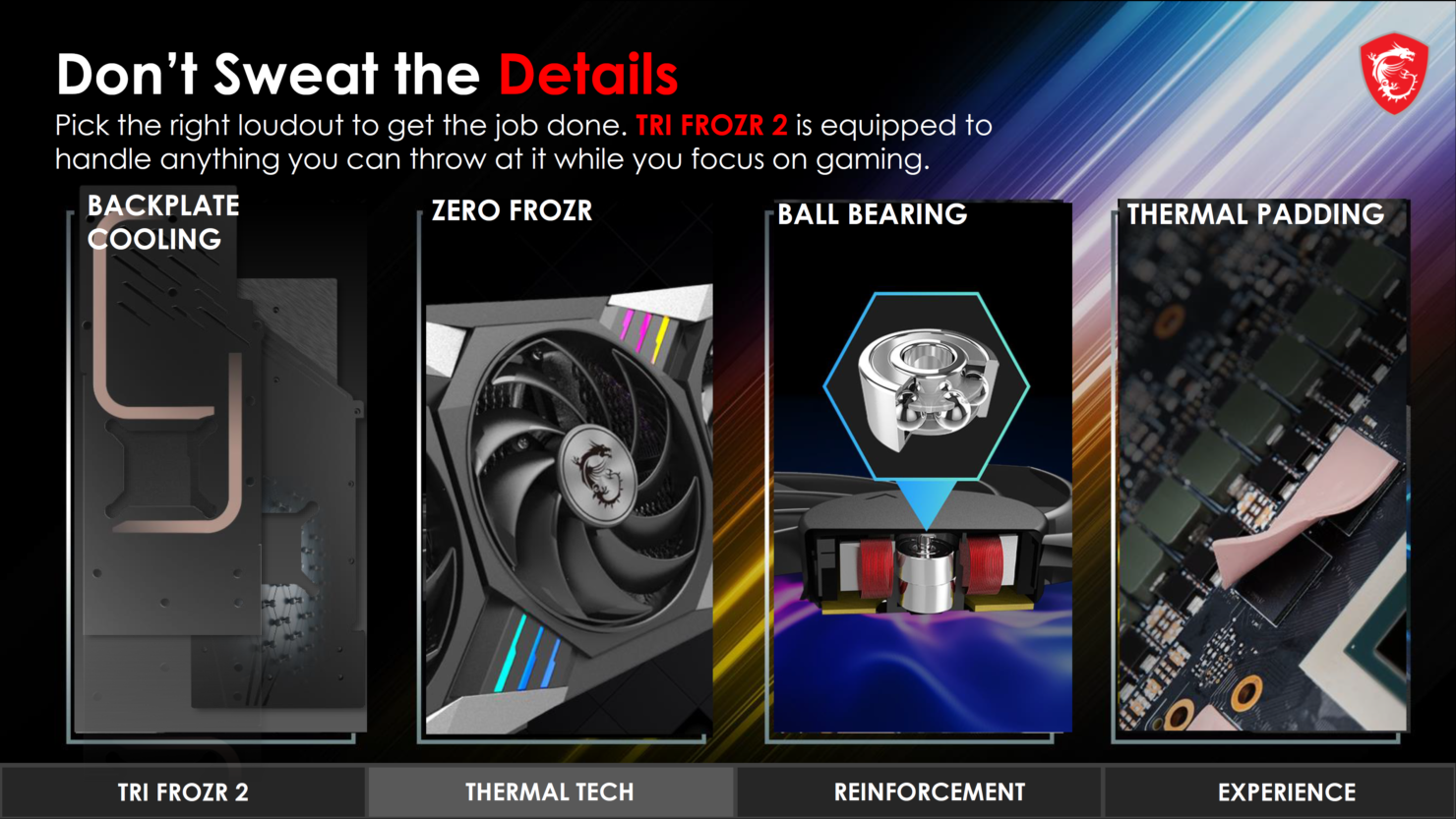 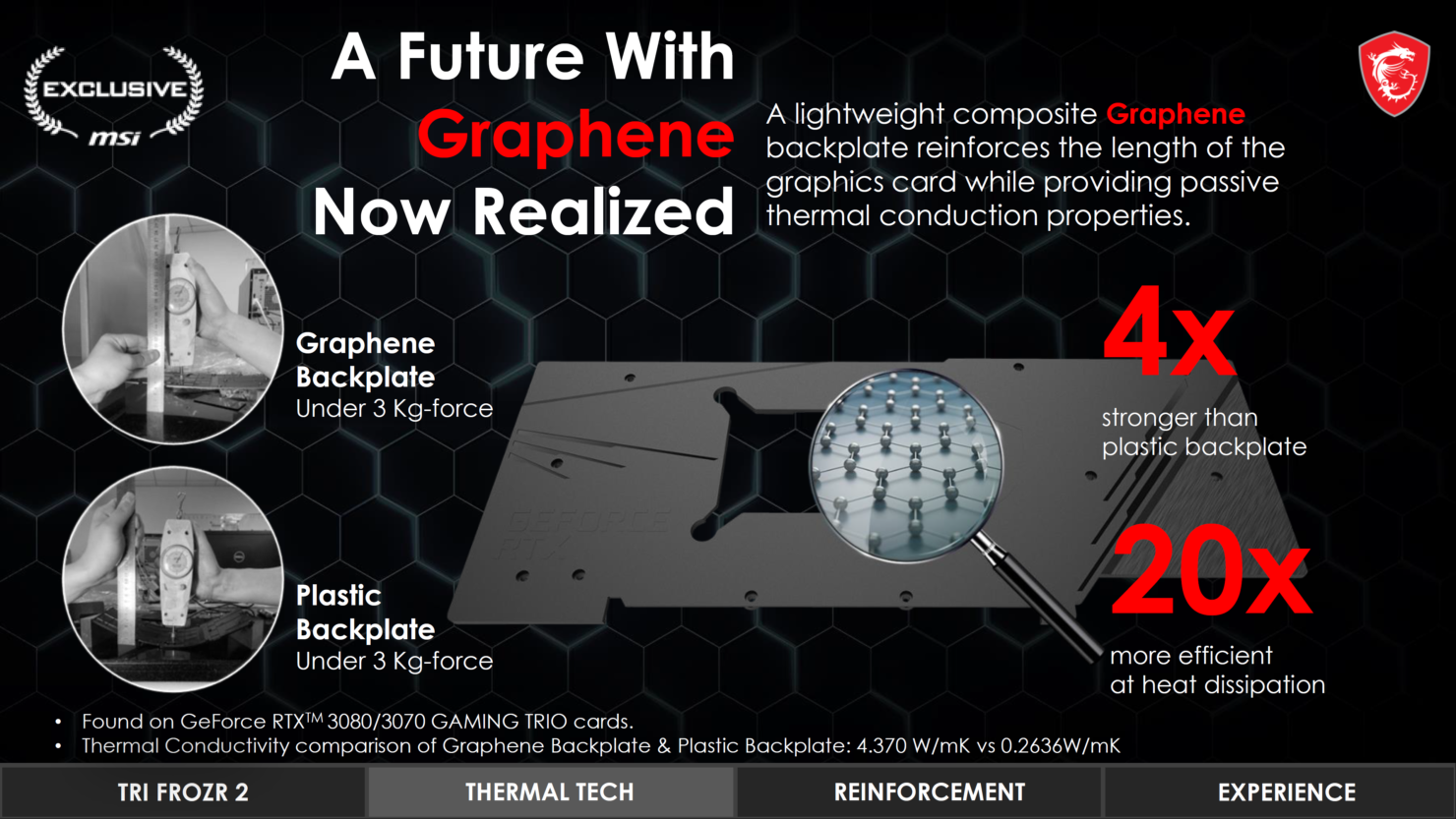